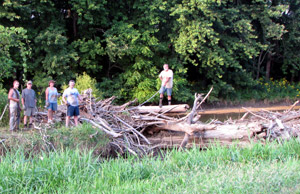 The big plan was to open the south side of the mill pond and move the creek (water) to the south side.  There was a large log jam up at the point (upstream end of the island).  During the big flood of 2008 it was completely washed out.  First time I ever saw it without a pile of trees.  However, a large tree (about 100 ft. long) washed in and hundreds of logs piled up on it.  The log jam was bigger than ever.  I didn’t think it was possible to move this.  So I tried to to move the creek a different way.  It helped but there was still too much water on the north side.

So, by using railroad ties to get across the mud I managed to get my tractor up on the island and drive to the upstream end.  There we used chains to drag out many of the logs.  Eric Liddle, Charlie Carlton, Karen, Chris Roe and me.  This helped but there was still too much water on the north side.

You can see a large tree below me just above the water.  The really big one is below that and under the water … so I couldn’t cut it with a chainsaw.