While the covered bridge was gone it was a great time to get an excavator down by the old mill dam.  A temporary road was built into our millpond to provide access for work on the new bridge.  This had completely shut off the water on the mill side of the creek.  And, Todd Crane had donated the use of his excavator for the 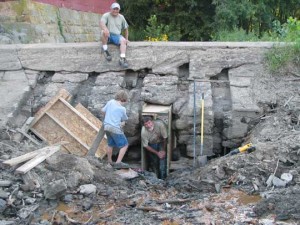 covered bridge project.  So, there it sat on the mill parking lot about 100 ft. from the dam.   I asked Todd if he could dig out the log jam and trash that was plugging the large hole in the dam next to the mill.  The next time they were doing some work for the bridge project they swung over and dug out the trash.  They also hauled it over the hill for me … about 5 dump truck loads.  This way I only had to pay for the time worked not the delivery and pickup of the machine.

Since the water was shut off we were able to dig the rest of the mud and trash out by hand.  Yes, by hand because there was so much stuff …rocks, chunks of cement, bottles, sticks …etc we couldn’t use a shovel.  Oh yeah and snakes.  We killed about 7 snakes during the process.  Normally I would ignore them and they would go away.  But not these snakes … they were very aggressive.  I did find 2 Coke bottles from the 50s that were not broken.

Then we started building the forms.  This took longer than expected because I wanted to restore the old wash out gate that was in the dam.  This is a gate down at the bottom of the dam used to flush out mud and …. stuff from the millpond.  We had a tight deadline – get the cement poured before the new covered bridge was set.  Because with the bridge in place we could not get the cement truck down next to the dam.  We managed to get it all done in time.