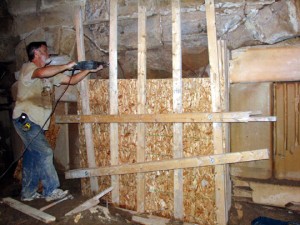 In this photo you can see the large openings where the water came into the mill.  The sandstone arch to the right and to the left is the tops of the old openings.  They were closed off with tiles and concrete sometime in the 1980s – I think.  the pillar between them was pretty bad so we poured a new one before we opened up the gate.  The one on the left is the one we later opened.  I’m hoping that one is enough.